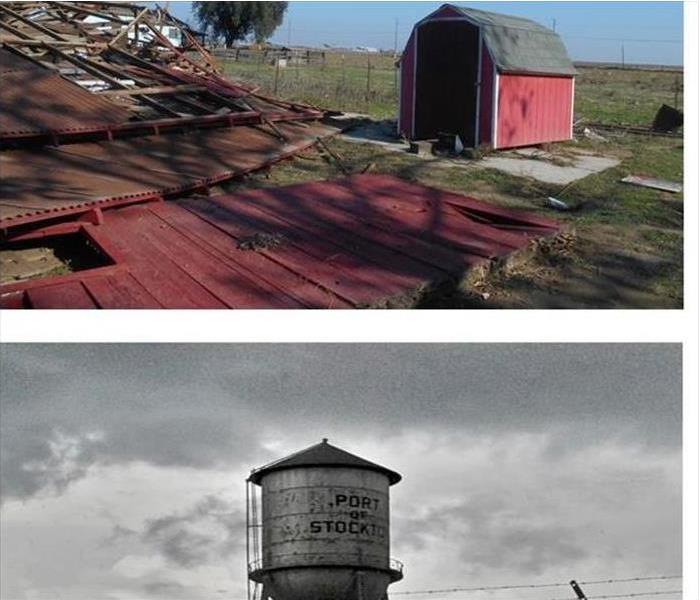 Tornado touches down in Denair.

SERVPRO of Stockton: At The Ready for Storm Damage and Tornadoes in Denair

Waterspouts are spotted every once-in-a-while along California’s beaches, but tornadoes are rare anywhere.  SERVPRO of Stockton Sales and Customer Service Representative, Jackie Irrgang, took the photo of the little shed that survived a twister that happened in 2015. The damaged structure was in the town of Denair.

On the very same morning that Jackie snapped her picture of the Denair tornado damage I was on my way to an appointment at the Port of Stockton. The sky grew unusually dark similar to an eclipse.  The atmosphere seemed dense, ominous.

I often travel with my 35MM digital camera and photo gear. I pulled to the side of the road to document the unusual weather conditions around the Port of Stockton industrial area. The photograph of the water tank was taken with a slow shutter speed and the color filter on. For those who are not photo-geeks, the available sunlight was diminished causing the image to look like a black and white photograph. It was as if a special effects artist had created a scene for a horror film. Photo copyright – Clayton A. Barry

I didn’t see a twister while I was standing at the side of the road with my camera and tripod. However, I left the car running, the door open and the radio on. I heard radio news alerts about Central Valley residents sighting funnel clouds. Then the reports stated, “It touched down in at least two places, damaging a barn in Denair and wooden fencings elsewhere.”

People in the American South and Midwest may giggle about this tiny tornado event. I understand. My point in mentioning it is to make a comment on the unpredictable power and scope of nature. With our present expanded understating and observations of climate change and weather restoration business owners need to step out of their comfort zones. Today ice storms, hail, wind damage, draught, and flooding can occur in all the usual places and all the unusual places. Who would think that large metropolitan cities in the Southern U.S. could be immobilized by ice and snow? Who would expect large-scale flooding because snow packs in nearby mountains melt suddenly, weeks ahead of the usual melting pattern?

I remember the earthquake of 1989 in Northern California. What I remember too was that an earthquake rattled Manhattan just a couple of weeks later and how surprised the New Yorkers were. They didn’t think it could happen there.

The days are gone when anyone can say, “Oh, that doesn’t happen here.” When you are dealing with a tornado, water, flood or storm damage in Denair, Stockton, Oakdale, or other local communities, a quick response to minimize the damage is very important. SERVPRO of Stockton can respond immediately to storm and flooding conditions. Call us 24/7 at 209-477-3090

Why Choose SERVPRO of Stockton?

Because We're Faster to Any Size Disaster

When a storm or tornado hits your Denair home or business, you need help immediately. Our quick response will help prevent secondary damage and help reduce restoration costs. (209) 477-3090